What is Angelman Syndrome?

The condition is named after the English physician Harry Angelman, who first described the syndrome in 1965. Angelman Syndrome (AS) is a rare genetic disorder, which is associated with developmental delay, epilepsy, lack of speech, motor problems, behavior and sleeping problems. There is currently no drug for the treatment of AS. A clear overview of what AS is and what it means for the child, parents and the family is given in the video below (You can find a link to the English version of the video in the tab 'The Angelman Syndrome (AS) clinic).

The condition develops when the UBE3A protein is absent or not working properly. The “recipe” for the production of the UBE3A protein is stored in our genetic material, the DNA. The DNA contains the genetic code for our hereditary characteristics, the genes. The DNA is packed in chromosomes.

The UBE3A protein is made by reading the UBE3A gene. This gene is located on chromosome 15. We have two copies of each gene; one from father and the other from mother. For the production of UBE3A, only the gene we received from the mother can be read. The UBE3A gene we got from our father is not readable.

The most common mutation that leads to Angelman Syndrome is the missing part of chromosome 15 ("deletion"), usually of the region 15q11.2-q13, which also contains the UBE3A gene. However, it can also arise because a child has twice inherited this piece of chromosome from the father and the UBE3A gene is missing from the mother (uniparental disomy, UPD). Sometimes the mother's gene cannot be read because the mother's DNA is not recognized as such and cannot be read (imprinting defect). Finally, there may be a small mistake in the UBE3A gene itself (UBE3A mutation). Usually, the genetic defect develops at the time of fertilization. Then there is a very small risk of recurrence. But in some cases (especially with UBE3A mutations) the mother is a carrier, an then there is a 50% recurrence rate. That is why it is important to have this examined.

How common is Angelman Syndrome?

Angelman Syndrome is rare. A very large study in Denmark showed that it affects about 1 in 20,000 people. We estimate that about 5-10 children with Angelman Syndrome are born in the Netherlands each year. Since the establishment of our center, we now have more than 125 children in care.

The Angelman Syndrome (AS) clinic 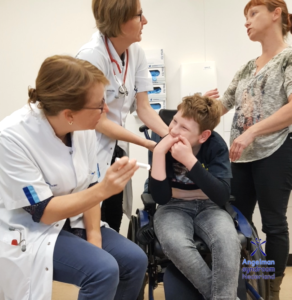 Children diagnosed with AS can be referred to the ENCORE AS Expertise Center by their general health care practitioner (In the Netherlands, ‘huisarts’) or a medical specialist. The enrolled children are seen and examined every year. We evaluate the development in the field of learning, movement and communication, epilepsy, sleeping, eating, growth and other common complaints in AS. The children keep their pediatrician and neurologist in their own region. Our goal is to further optimize healthcare through our specific experience.

The AS consultation hour is 1x per month on Wednesdays. The parents and the child always see the pediatrician, pediatric neurologist and remedial educationalist. We also hope to add a nursing specialist to our team soon. The clinical geneticist is also present at the first visit. 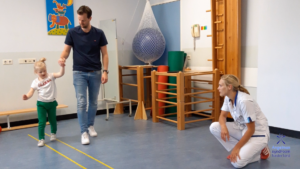 In addition, the speech therapist, the physiotherapist and the child psychiatrist see the child at fixed times. On indication, we also engage the dietician, ophthalmologist and / or orthopedist. From the age of 18, the patients are seen by a Physician for Intellectual Disabilities (AVG), a behavioral therapist. In these movies you will get an impression of what we offer, click here for the short version, click here for a longer version. 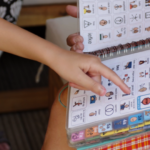 You will also be seen by a speech therapist and/or remedial educationalist at the ENCORE outpatient clinic. Among other things, they look at your child's current communication and try to stimulate it. It is assumed that every child who cannot speak well (enough) can learn to communicate better through augmentative and alternative communication (AAC). The communication is then supported with, for example, icons, photos, gestures or words. This movie (only in Dutch) explains what AAC is. You will see that using AAC opens up a world for people for whom speaking is difficult. It greatly helps them to express their thoughts and wishes.

Treatment has been symptomatic so far. Epilepsy is treated with drugs and sometimes a special diet. The development, sleeping and behavior are supported with therapy by the physiotherapist, speech therapist and behavioral therapist. The parents receive a lot of advice on what to practice with their child at home. 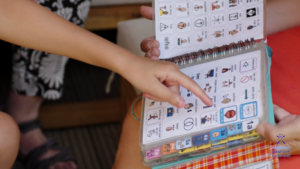 One of the spearheads of our center is supporting the use of augmentative and alternative communication (AAC) from an early age. Sometimes drugs are needed for concentration or behavior.

For information on developing new therapies, click here to go to the research page.

In order to provide the best possible care to patients with a rare condition, it is essential that global knowledge about the condition is gathered. Nationwide, centers of expertise have been set up to stimulate care for rare disorders and to gather knowledge. For the formal recognition of an expertise center by the Ministry of Health, an important condition is that the expertise center gathers, analyzes and shares knowledge through publications. These can be publications in scientific journals, but also treatment guidelines for health care professionals or information brochures for patients or caregivers. We optimize care and research within ENCORE through standardized follow-up and close collaboration between doctors and researchers. That way, we can ultimately develop better treatments for rare conditions. You may therefore be asked to participate in research. Participation in research is always on a voluntary basis. The data obtained is stored and analyzed in an anonymous form. All research has been approved in advance by an ethics review committee.

The parent organization has made information videos about Angelman Syndrome, to which ENCORE has contributed. To see the videos, click here.

The Angelman Syndrome expertise center regularly publishes newsletters.
Click here to read the most recent newsletter (only in Dutch)

You can also find the previous newsletters below (only in Dutch):