What is a DNA repair disorder?

Almost every cell in our body contains a complete set of our genetic material; encoded by DNA. The DNA in our cells gets damaged multiple times throughout the day. This damage can be caused by (external) environmental factors, such as exposure to sunlight, cigarette smoke, X-rays or certain medicines (e.g. chemotherapy). In addition, it can also arise as a result of the body's own processes, such as when cells divide or from by-products of our metabolism.
Normally, our body is very capable of recognizing and repairing this DNA damage. This keeps the cells healthy.

With a DNA repair disorder, the mechanism to repair the broken DNA is broken works less well. As a result, some of the DNA damage in the cell is not repaired or not properly repaired. This causes an accumulation of DNA damage over time. Cells with too much DNA damage will die. As a result, more and more cells are lost. Depending on where the problem is in the repair mechanism, it leads to a variety of symptoms and premature aging. 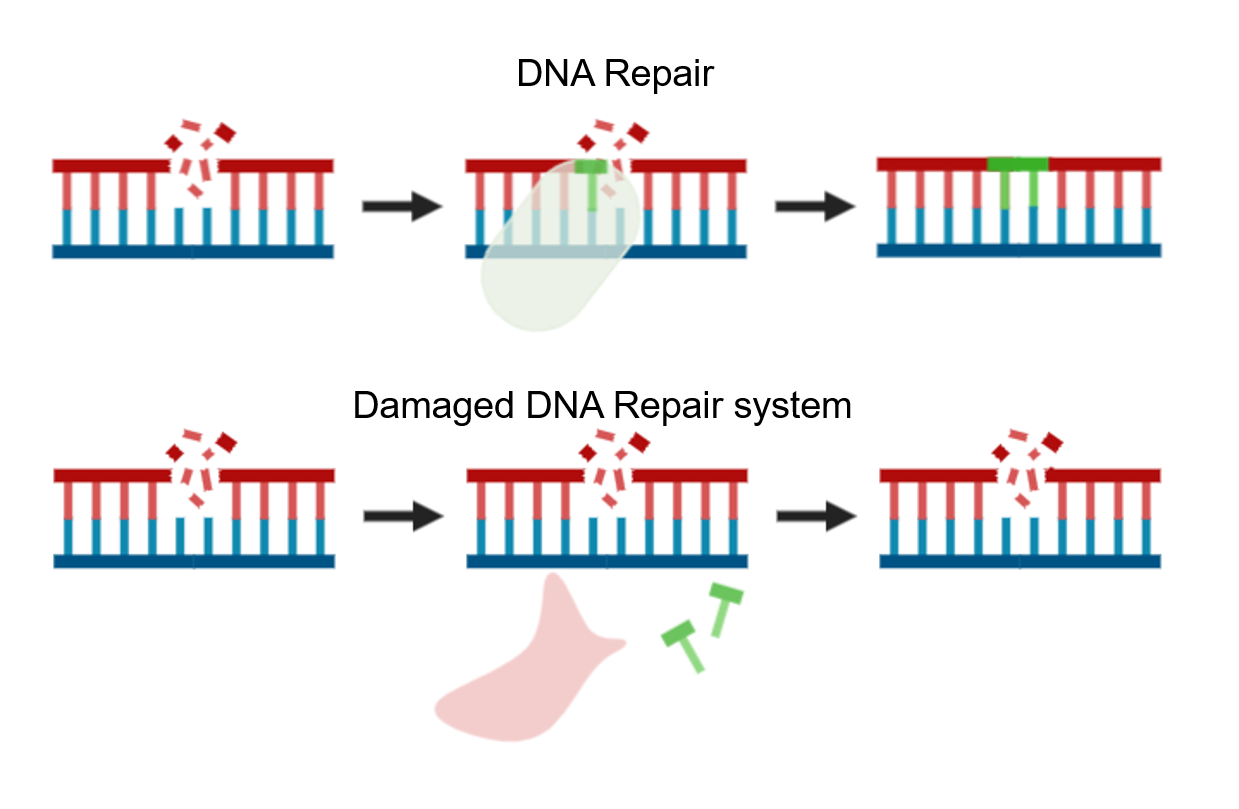 Information about Cockayne Syndrome (CS):
CS is a condition involving multiple parts of the body. The main features of CS are growth retardation before and especially after birth with short height, light weight and a small head. Serious nutritional problems and seriously delayed development also occur. Over time, neurological deterioration is visible, leading to brain abnormalities and spasticity. Children with CS are hypersensitive to sunlight, often have hearing loss, eye problems, abnormalities of the bones and teeth and liver and kidney function disorders. The children show accelerated signs of aging (on the face and also on the body). There is no cure for CS. The life expectancy of children with CS is limited.

There are several types of CS, which are classified according to the severity of the features and the age at which the features present.

Information about Trichothiodystrophy (TTD):
TTD is a condition in which multiple parts of the body are affected. This can range from mild to severe. The main features of TTD are extremely brittle and brittle hair, fragile nails and dry, flaky skin (ichtyosis). About half of the children with TTD are hypersensitive to sunlight. Furthermore, growth and feeding problems, hearing loss, eye problems and dental problems are common. Because the immune system does not always work properly in children with TTD, children with TTD are more likely to have infections. Most children with TTD have some degree of intellectual disability with or without behavioral problems (autism). As the children get older, their development slows down. Children with TTD show accelerated signs of aging, especially on the face. There is no cure for TTD. The life expectancy of people with TTD has probably been shortened.

Information about Xeroderma Pigmentosum (XP):
XP is a condition in which several parts of the body, especially the skin, are affected. The main feature of XP is the extreme hypersensitivity of the skin to UV light, with very little exposure to the sun causing redness and blisters. This causes many freckles (usually already in the 1st or 2st year of life), which become larger over time and develop into larger pigmentation spots, (malignant) skin tumors at a very young age (<10 years), eye infections and eyelid abnormalities. Some of the people with XP develop neurological problems, such as intellectual disability, hearing loss or spasticity. There are eight different forms of XP known with variable severity. There is no cure for XP. The treatment focuses on the prevention of skin damage and the development of skin tumors. To this end, exposure to UV rays (sunlight) should be avoided as much as possible and skin tumors should be treated or removed as soon as possible.

What causes a DNA repair disorder?

How common are DNA repair disorders?

DNA repair disorders are very rare conditions. They are estimated to affect approximately 1 in 500,000-1,000,000 people.

Based on personal history, family history, physical examination and external facial features, a suspicion of a DNA repair disorder may arise.

Such a diagnosis can usually be confirmed with the help of additional genetic testing in blood. Sometimes, in addition to the blood test, research is also performed on the skin and / or hair cells.

Prior to the consultation, as much information as possible is collected via a telephone intake interview with the nurse specialist and an additional questionnaire is sent to the parents/caregivers, which is completed at home prior to visiting the clinic.

During the outpatient visit or digital web consultation, your child will be seen by a multidisciplinary core team, consisting of a pediatrician, pediatric neurologist, clinical geneticist, dermatologist, dietician, GZ psychologist and nurse specialist. The consultation hour is concluded with a multidisciplinary team meeting, after which we discuss the conclusions and if necessary, the proposed follow-up with you.

Necessary follow-up examinations are carried out as much as possible on a single day admission to hospital. During this admission, additional research will be carried out by the doctors from the core team. We pay specific attention to the development, behavior and feeding problems of children with DNA repair disorders. If necessary, we also consult other specialists, such as the orthopedist, ophthalmologist, Ear Nose Throat specialist, cardiologist or a special dentist.

During the day admission, a representative of the patient association for children with a DNA repair disorder (Stichting Amy & Friends Nederland) is also present for questions and information.

Based on the outpatient clinic contact, we draw up a specific follow-up program, tailored to the needs of your child and those of you as a parent. We work closely with your child's local care providers. There is no curative treatment for DNA repair disorders. Current treatments are aimed at reducing the complaints and preventing complications as much as possible.

In order to provide the best possible care to patients with a rare condition, it is essential that global knowledge about the condition is gathered. Nationwide, centers of expertise have been set up to stimulate care for rare disorders and to gather knowledge. For the formal recognition of an expertise center by the Ministry of Health, an important condition is that the expertise center gathers, analyzes and shares knowledge through publications. These can be publications in scientific journals, but also treatment guidelines for health care professionals or information brochures for patients or caregivers. We optimize care and research within ENCORE through standardized follow-up and close collaboration between doctors and researchers. That way, we can ultimately develop better treatments for rare conditions. You may therefore be asked to participate in research. Participation in research is always on a voluntary basis. The data obtained is stored and analyzed in an anonymous form. All research has been approved in advance by an ethics review committee.

To learn more about research into DNA repair disorders at ENCORE, click here

The Amy & Friends Netherlands Foundation is the patient organization for DNA repair disorders, click here to go to the website.

You can read more about TTD via the websites below:

You can read more about XP via the website below